Most parents are afraid to travel with toddlers. The parents we know thought we were completely insane for taking our one-year-old twins on a two-week international trip. My wife and I did the unthinkable and proved them wrong and not only survived, but had a great time. I’m here to tell other parents that yes, they can do it too.

We had some drizzle, some bumpy seas, and a few tantrums at dinner, but our cruise around Norway turned out to be the perfect vacation for us with our one-year-old twins. My wife and I love to travel. We’ve traveled internationally at least once a year since we met, traveling across Europe multiple times, Singapore, and Hong Kong. We even lived and worked in Germany for over a month a few years ago. When we had kids, we knew it would only be a temporary disruption to our traveling and that we would want to imbue them with the same passion for travel. Once they turned one, were on a regular schedule, eating real food, and able to stay awake for more of the day, we knew it was time to head overseas.

We picked a cruise for our trip because we knew that making long road trips or multiple flights would be incredibly difficult with little children. With a cruise ship as a mobile home for two weeks, we knew we would get to see different parts of the country every day and would have a fairly regular routine that the boys could get used to. In the first year of their lives, we found getting on—and staying on—a schedule was the key to successful days. Having cruised before, we also knew there would be plenty of food for them and us and entertainment to keep everyone occupied. 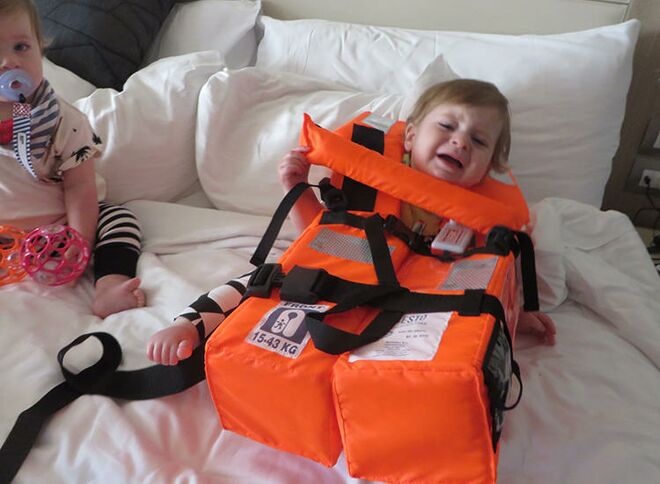 Still, part of the journey required a plane. Since this was our first trip on an airplane with children, we knew to expect difficulty, but I was surprised by how difficult the flight was. We purposefully booked a flight right at their bedtime, figuring they could have their last bottle right during takeoff to help their ears pop and minimize pain and then they’d fall asleep early on the flight and sleep through it. This ended up working, but only after about three hours of each of us rocking them in the aisle until they were asleep in our arms. They had been on an extremely regular sleep schedule and sleeping through the night for months, but we underestimated how much the new scenery of a plane and how interesting trying to explore the plane would be for them. Once they were soundly sleep, one in the bassinet and one on the floor next to the bulkhead in a facsimile of bunk beds, we finally got some rest ourselves.

Once we decided on a cruise, we had to choose the destination. We had wanted to travel to Norway for quite some time, and recent articles about the beauty of the fjords, including a recognition of them being the most beautiful natural UNESCO world heritage site helped us make the decision. We had also seen Norway appear on lists of great places for active parents to travel to with kids and loved the Norwegian approach to family friendly destinations and entertaining children with the splendor of the outdoors. Added into this was the benefit of nearly everyone speaking great English.

Norway also has a culinary culture with incredible fresh bread, world-renowned fresh and smoked fish right from the fjords, and unique meat like reindeer and whale. This worked surprisingly well with what the boys were eating. I didn’t believe one-year-olds could enjoy smoked herring so much until I saw it with my own eyes. With all of these benefits, Norway became an easy choice.

Norway isn’t exactly a budget destination; food and beer prices especially are among the highest in the world. However, visiting on a cruise ship meant we weren’t splurging on meals or accommodations, and our daily visits to craft breweries were our only large expense. Since the attractions are mostly focused around nature, admission was free or cheap, so overall the trip remained relatively affordable, maybe even more so than traveling around the rest of Europe may have been.

There was never a dull moment on our trip, though it’s not like we have many dull moments at home either with twin toddlers. Our cruise brought us up and down the western coast of Norway along the majestic fjords up beyond the arctic circle. People thought we were crazy to take the boys on a trip that focused around visits to towns of under 1000 people, but these small towns and villages were the highlights of our visit.

In Eidfjord, we rode a small train around town that the boys hooted and hollered on, having an absolute blast. We also took a bus up into the mountains to see one of Norway’s largest waterfalls and the boys enjoyed a Norwegian waffle with fresh berries. While the incredible sights of the fjords will always be imprinted in our memories, it is the small moments like one of the boys smacking his face into the waffle and coming up covered in red berries with a huge grin on his face, followed by his brother looking at him in shock for one moment, then doing the exact same and laughing like a total maniac that we’ll remember forever. 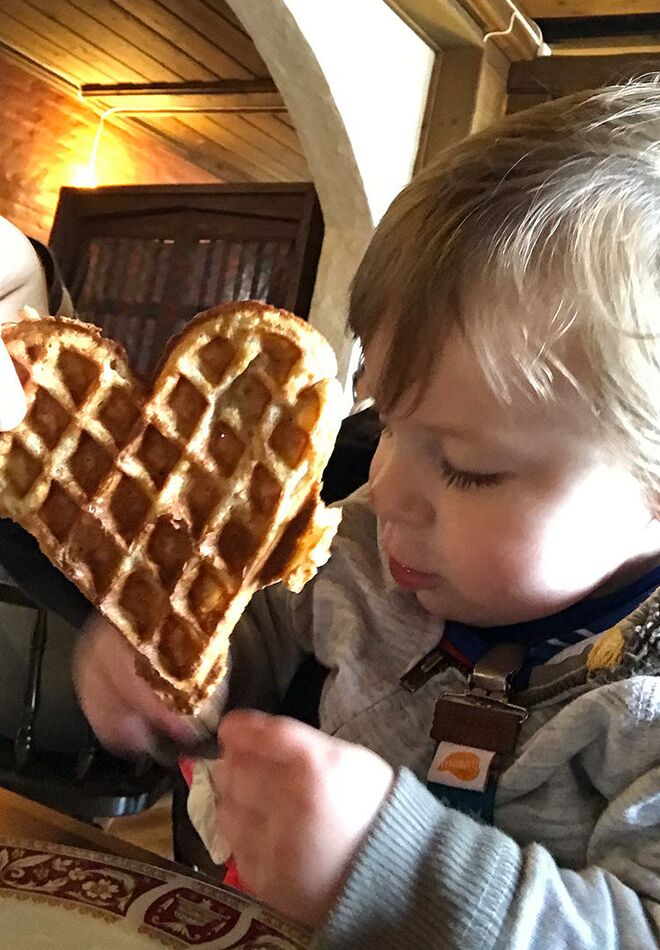 In Bergen, we used the funicular—a type of railway—up the nearby mountain that offered amazing views of the city and harbor. Thankfully we had thought to buy tickets online ahead of time and were able to skip a massive line to buy them. Booking early online was a huge benefit during much of the trip. Thanks to friendly tour companies in the country, I was not only able to book ahead and save money, but I could also make arrangements for the boys and their stroller that worked out perfectly. After taking the funicular, we hiked to a nearby lake, completely populated with fellow families out with their kids in strollers, swimming, sunbathing, and even kayaking on the small lake. It was probably the time we felt most like locals, enjoying family time together out in nature like true Norwegians.

Much of the trip was spent reconnecting with nature. Even in the larger towns of Alesund and Bergen, we found ways to escape the city centers and get out into nature thanks to nearby trails and overlooks. In Alesund, we mistakenly thought we could take the boys up to the peak of a nearby mountain in their Maclaren Twin Triumph stroller up rocky uneven steps. When we saw them, we instead took the long way around the back, pushing a twin stroller uphill for a trip of five miles, partially on gravel roads. Norwegians love a good hike and we should have realized that when locals told us the path was “pretty easy” instead of just easy, it would be intense.

We also visited the northernmost point in Norway and Europe at the North Cape which truly feels like the edge of the world. On the way, we saw herds of actual reindeer and even got to see one up close. The boys apparently thought it was a big dog as they repeatedly chanted “dog” at it—we’re still working on their animal vocabulary—and tried to crawl up to it. It wasn’t quite as interested in them as they were in it.

Like all good trips, ours to Norway ended way too soon. We had a nightmare experience getting back home due to a canceled flight and a day and a half of delays which was made far worse by trying to keep the boys on a schedule while we had no idea of what our schedule actually was, but even it couldn’t ruin the wonderful time we had as a family on our first trip together. Norway was the perfect destination for us thanks to a great mix of family friendly culture and unbelievable natural attractions, and the cruise was the perfect way to see it.